Last year of the Tornado GR4

Photo: A Royal Air Force Tornado GR4 plugs in reheat in one of its RB199 engines as it tops up its fuel tanks from a US Air Force KC-10A Extender. USAF TSgt Gregory Brook)

By the end of March 2019, one of the world’s most successful, combat-proven, fast jets will have been retired.

Having entered front-line service with the Royal Air Force in 1982, the Tornado GR has assembled an unparalleled service record. It has been in constant combat action since 1991, and these very same aircraft still provide the backbone of the RAF’s precision-strike force.

You’d be hard pressed to find a combat jet in any air force around the world that has offered the kind of value for money that the Panavia Tornado GR4 has for the RAF. The very same airframes that entered service as GR1s way back in 1982 are still right at the leading edge of British air-power projection all these years later in Operation ‘Shader’ in the Middle East. They’ve been upgraded heavily, and many of the early jets have now been retired — reduced to parts to help resource and maintain the dwindling remaining fleet — but around 30 aircraft still remain in service in three front-line squadrons.

Ultimately, upgraded ‘Project Centurion’ Eurofighter Typhoons and F-35B Lightning IIs will replace these old warriors next year, but for now the RAF Tornado GR Force (TGRF) is as busy as ever!

The fact is that when the British government calls for precision strike, combat ISTAR (intelligence, surveillance, target acquisition, and reconnaissance), or that ‘day-one’ entry into contested airspace, the Tornado GR4 has remained the platform of choice. The balance is tipping towards the swing-role Typhoon, and ultimately the new capabilities that will enable the Typhoon to replace the Tornado — MBDA Storm Shadow and Brimstone weapons — will be fielded at the end of this year. Until then, the Tornado remains the only UK platform capable of carrying and surgically employing the MBDA Storm Shadow stand-off cruise missile and the similarly world-beating Dual-Mode Seeker (DMS) Brimstone. 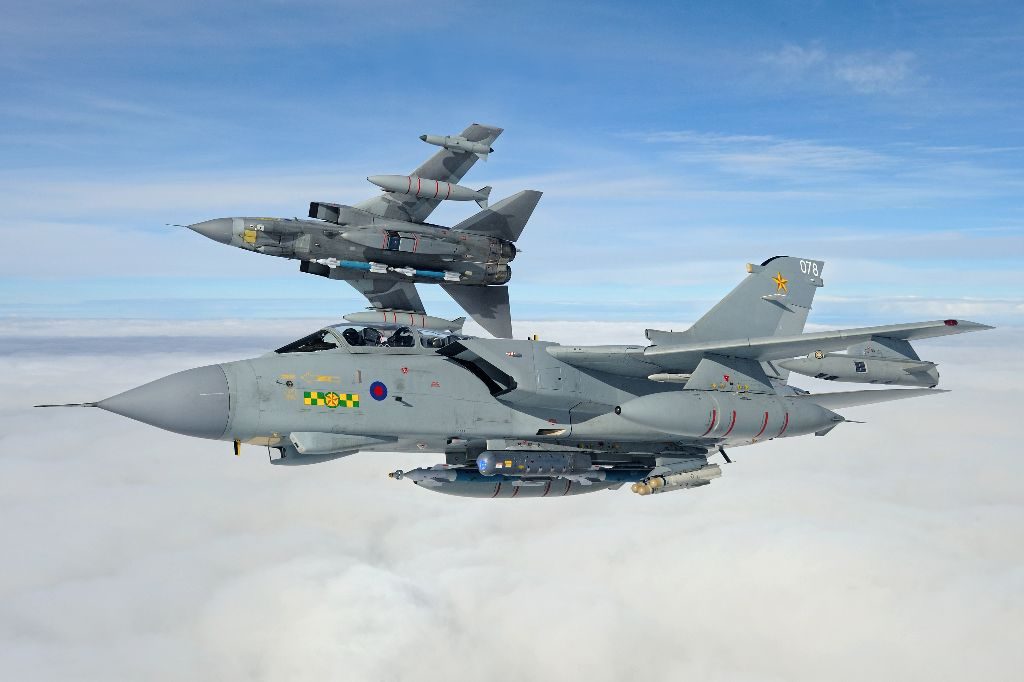 Supreme striker
The Tornado of today is a world away from the original Tornado GR1s that joined No IX (Bomber) Squadron way back in 1982. Even in the last decade they’ve come a long way. Some 36 years on and the RAF’s ‘oldest precision-bomber squadron’ is still flying the Tornado GR4 from its home at RAF Marham, alongside Nos 12(B) and 31 Squadrons.

The main improvements relate to weaponry and the targeting pod. The transition from TIALD (Thermal Imaging Airborne Laser Designator) to the Litening III RD (ROVER datalink) pod, and the move from the Enhanced Paveway II (EPW2) class weapons to the Paveway IV mean that the GR4 has been able to keep at the very vanguard of precision-strike capability. Although the airframe externally hasn’t changed, the kit the RAF has bolted on to it and the software that beats in its soul have kept it relevant and potent.

A constant set of refinements and mission-specific enhancements has continued to trickle down to the TGRF over recent years. However, with the ultimate retirement on the horizon, major upgrades have petered out. The Weapons Systems Officer (WSO) — still commonly referred to unofficially as ‘nav’ or navigator — sits in front of a large central screen in the rear cockpit that came about as a result of the Tornado Advanced Radar Display and Information System (TARDIS), which replaced the old circular moving map with a new radar processor and digital map. The TARDIS upgrade also saw the retrofit of former Tornado F3 WSO hand controllers, which has made manipulation of the Litening pod far more straightforward. Ultra’s Secure Communications on Tornado (SCoT) radios provide for robust communications and the long-awaited Tactical Information Exchange Capability (TIEC) datalink is now also found across the fleet and includes Link 16 with an Improved Data Modem (IDM). The Tornado Collision Warning System (CWS) is a new Traffic Collision Avoidance System (TCAS) that is also in squadron use.

The Tornado has been pivotal in the UK maintaining a capability to have a complete kill chain — find, fix, track, target, and assess afterwards. 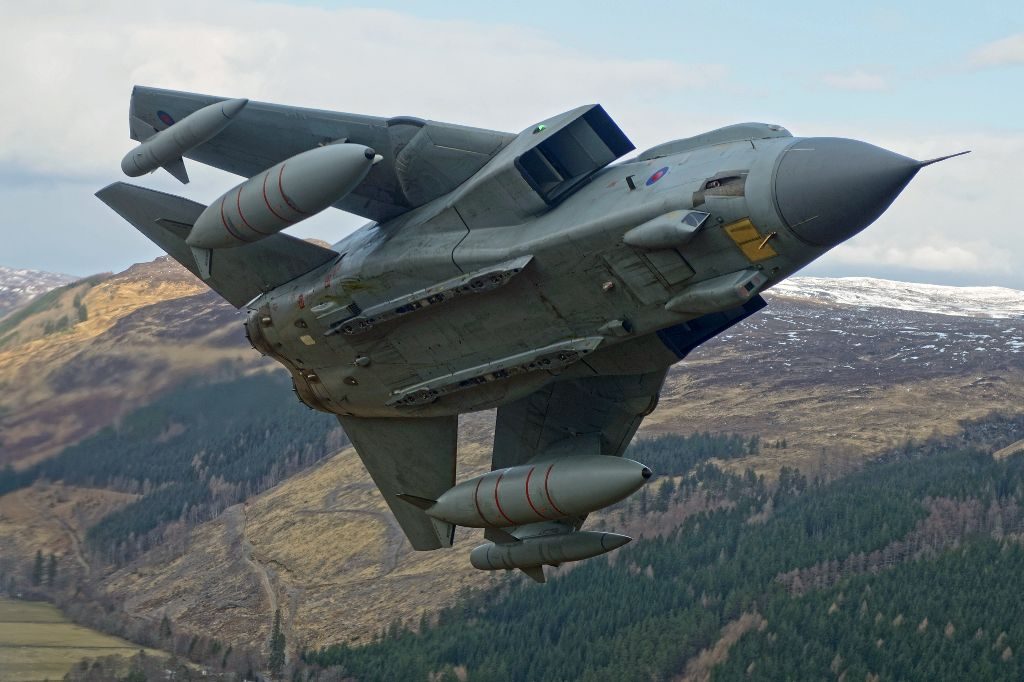 Low and fast — the GR4 in one of its primary domains. Jamie Hunter

A large remit
With such a wide array of weaponry and potential missions, the average squadron aircrew has a lot to keep on top of and training is planned in a huge amount of detail. The GR4s fly more CAS now than before and every minute spent airborne is about getting every ounce of operational capability generation out of it. The GR4 mantra is train hard, fight easy.

No one can argue with the combat pedigree of the Tornado GR4: from Operation ‘Granby’ (the 1990-91 Persian Gulf War), through the following years of Iraqi no-fly zones, Operations ‘Jural’ and ‘Desert Fox’, Operation ‘Allied Force’ over Kosovo, Operation ‘Telic’ in 2003 and the enduring Iraq mission, Operation ‘Herrick’ in Afghanistan, Operation ‘Ellamy’ over Libya, Operation ‘Shader’ over Syria and Iraq today, not to mention various other vital missions. The Tornado has earned an unequalled place in the RAF history books.

The Tornado GR4 will bow out at the very top of its game. It’s the best it has ever been. It has been deployed operationally since 1990 and has been in combat action 24/7, 365 days a year every day since. As the RAF looks to Typhoon and the F-35, it sees very capable successors waiting to take on the GR4’s mandate. For the Tornado itself, it will likely maintain its readiness and ops tempo right until the last squadron commander turns out the lights. 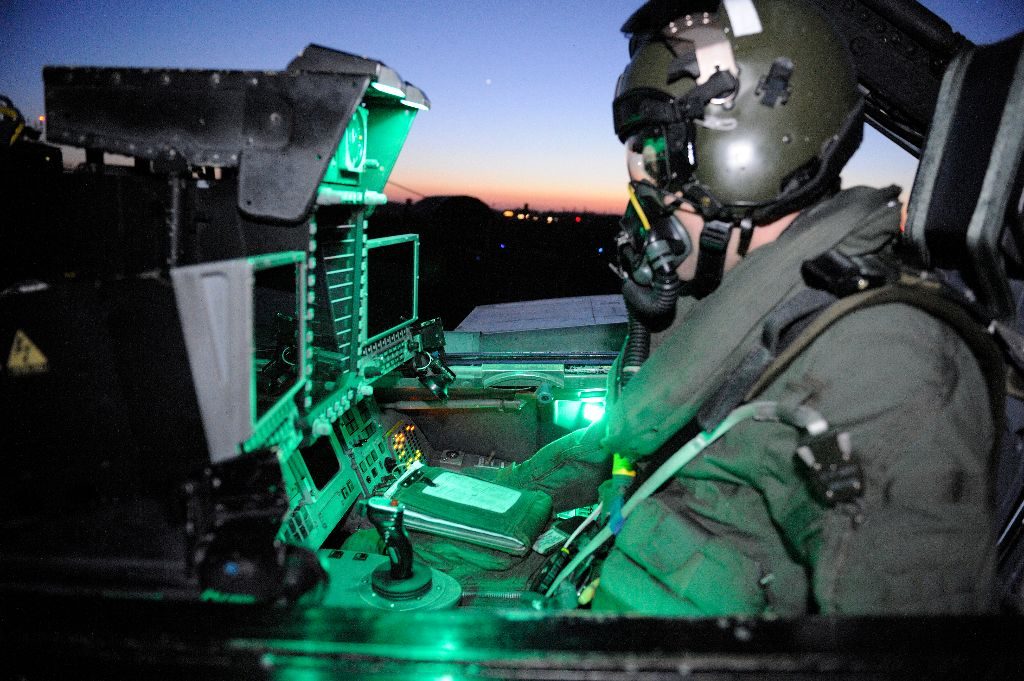 July 2020The July 2020 issue of Combat Aircraft Journal is a Super Hornet special. It features VFA-122, which is the US Navy’s west coast training unit. The issue also details the Block III variant of the Super Hornet, the Service Life Modification that is injecting new life into the oldest airframes, the latest USAF strategic bomber operations, the US Coast Guard in Alaska and Russia’s A-50 ‘Mainstay’ plus much more.