Boeing, in partnership with Saab, is offering a ‘clean sheet’ design for the T-X competition.

BTX-1 program history
In 2010, Chris Chadwick, President of Boeing Military Aircraft said that an all-new aircraft would be the ‘favored aircraft’ for T-X. He commented that he didn’t see the current options (M-346, T-50 and Hawk at that time) as ‘natural T-38 successors’, adding that modifications required to bring these aircraft up to USAF specifications may mean new designs were better suited.

Boeing officially entered into a strategic partnering arrangement with Saab of Sweden in 2013 to design and build a new ‘clean sheet’ T-X contender. It seems that the two parties had been talking about joint options since 2010. Boeing and Saab’s recent Joint Development Agreement (JDA) for the all-new jet training aircraft was formally announced on December 6, 2013, Boeing would act as the prime contractor, with Saab as primary partner to cover ‘design, development, production, support, sales and marketing.’

Boeing Military Aircraft President Chris Chadwick commented: ‘Boeing and Saab form the foundation for what will be the strongest, most cost-effective industry team.’

Saab made efforts to point out that the new aircraft is (contrary to recent speculation) not a Gripen, not even a stripped-down Gripen — it is an all-new design. Boeing was keen to exploit Saab’s lean manufacturing know-how to develop the aircraft in an affordable and agile manner. The current economic climate in the USAF means that the aircraft will indeed need to be both affordable and able to meet the exact parameters required for T-X. The only reason for building a ‘clean sheet’ design is that it can be specifically tailored as a bespoke solution to meet USAF requirements. It may be the only way to win.

Lennart Sindahl of Saab commented in 2014: ‘The last time Saab designed a clean-sheet aircraft was 1982. T-X will be a clean-sheet design. It will give us a good chance to design from scratch. Some people thought we would take the Gripen and make it into a trainer. We will never do that.’

Boeing revealed the new aircraft on September 13. The Boeing/Saab team’s ‘clean sheet’ design, internally known as the BTX-1, has been designed to be cost-effective and to meet all T-X program requirements, according to the US manufacturer. Those in attendance at the rollout event were surprised to learn that Boeing/Saab has built two aircraft — T1 and T2, serials N381TX and N382TX respectively — which Boeing says are ‘not prototypes, but production aircraft.’

Leanne Caret, Boeing Defense, Space and Security President and CEO, said the aircraft is ‘real, ready, and the right choice for training pilots for generations to come.’ 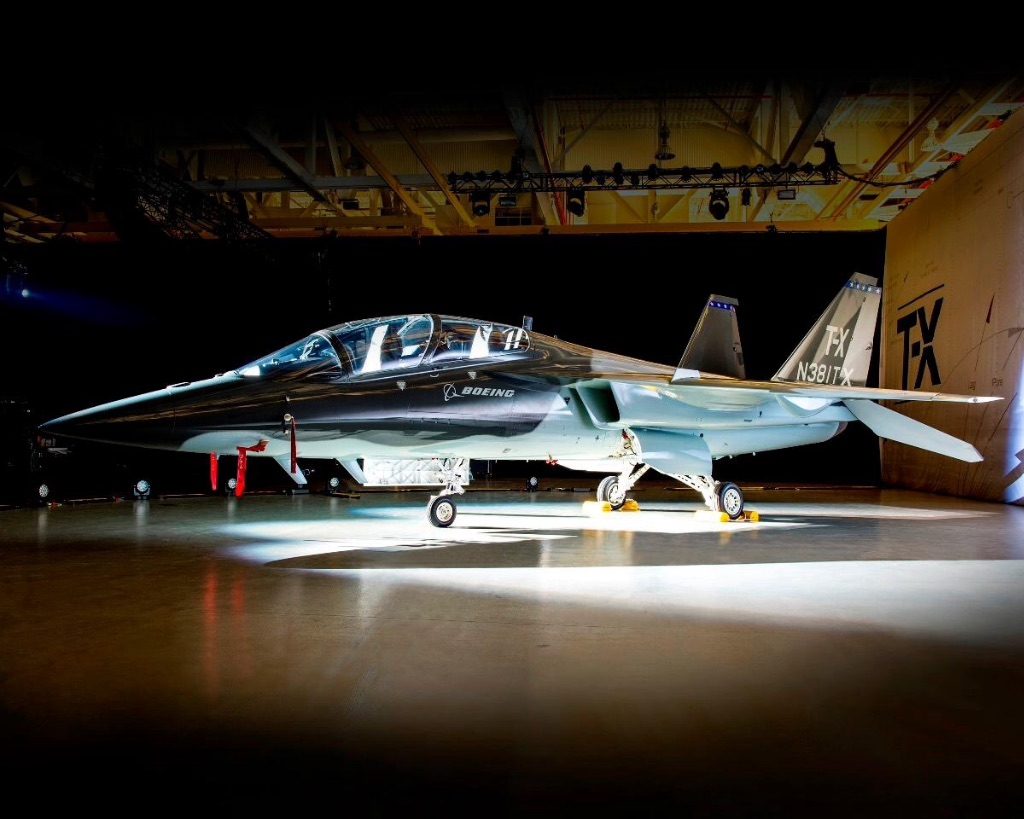 T-X suitability
The Boeing/Saab offering features a twin-tail design, a large cockpit with what appears to have excellent visibility (dubbed ‘stadium seating’ by Boeing), plus a leading-edge root extension (LERX) similar to that found on the F/A-18 Hornet family. Boeing’s T-X has a single engine, the General Electric F404 afterburning turbofan also used in the Hornet. Boeing says the aircraft’s ‘fighter-like design’ and performance with the twin-tail design will ‘provide excellent control, inherent speed break functionality, and safer air refueling’. Darryl Davis, President of Boeing’s Phantom Works, said the aircraft was designed to meet all program requirements, and noted that it will offer high angle-of-attack (AoA) and high-g performance. ‘We can hit every one of the requirements’, Davis says.

Boeing also stressed that the cockpit design offers ideal instructor positioning and visibility, both for flight instruction and for advanced visual air combat training. The Boeing T-X offering utilizes a modern, fighter-like cockpit with a reconfigurable large-area display (LAD) that mimics those found in the F-22 (although not a LAD) and F-35. Part of this, Davis said, was to allow the students to experience the level of avionics management and sensor integration required of current fifth-generation aircraft. The Boeing T-X is also compatible with night vision goggles, something that the T-38 lacks.

The Boeing T-X is provisioned for an internal in-flight refueling capability and it has a centerline hardpoint for carrying instrumentation pods. The wings are designed to add wing stations, if needed. 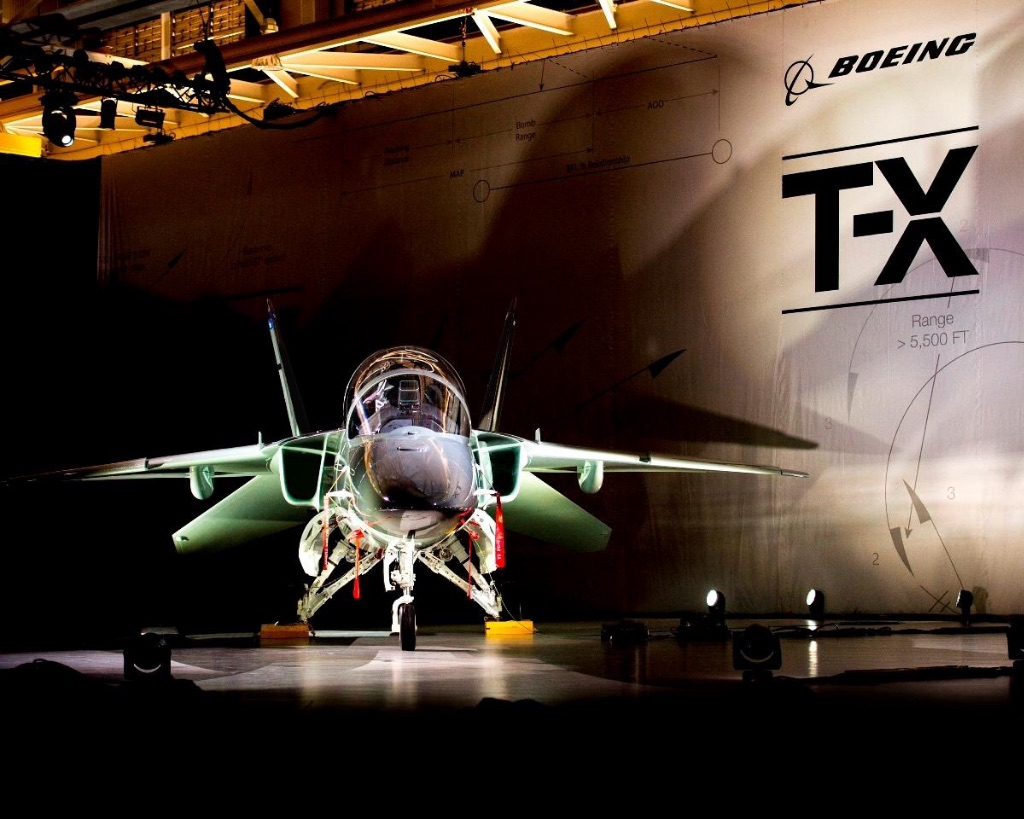 Synthetic training
The Boeing/Saab offering is not simply an aircraft, but a larger system that includes the trainer aircraft and a ground-based training and support program that provides ‘real-as-it gets’ simulation, interactive classroom lessons, computer-based training modules, adaptive training that adjusts to students’ needs, and a complete suite of instructor tools.

CA comment
With the main Boeing military combat aircraft production line at St Louis facing the end of F-15 Eagle and F/A-18E/F Super Hornet by the end of this decade, political pressure will be on Boeing’s side to maintain the capabilities in St Louis. Saab offers lean manufacturing techniques, which will undoubtedly drive down production costs for this project, in the face of having to start from scratch when it comes to certifying an all-new air vehicle. It will also be interesting to see how Boeing plans to offer high-end embedded synthetic training to complement the aircraft itself.

Of the four T-X contenders, only Northrop Grumman and Boeing/Saab are offering ‘clean sheet’ designs. The Air Force will issue its formal request for proposals (RFP) later this year or early 2017, followed by a year-long down-select process and a decision in fall 2017. T-X initial operating capability is currently set for Fiscal Year (FY) 2024, with final deliveries of the planned 351 aircraft ending in FY 2032 to 2034.

Boeing says that these first two aircraft are not prototypes, but rather ‘real aircraft’, the first aircraft will undertake flight tests by the end of the year, will be used to clear the envelope and systems before evaluating KPPs, flying an ‘accelerated test program’ over the course of several months. This is of course exactly the job of a traditional prototype.

Boeing’s assertion that the first two aircraft are production representative and not prototypes would seem to be an extremely bold claim, since even if the Boeing T-X aircraft have been built to production standards, it is hard to see how they could represent as low a risk as the T-50 (flying since 2002 and in service) or the M-346 (flying since 2004 and in service).

The two completed aircraft will be used to show the USAF the type’s performance, affordability, and maintainability advantages — much like a traditional demonstrator.

The various T-X bidders hope that the successful T-X trainer will also gain significant export orders, however this is secondary and like its rivals, the Boeing T-X is tailored and optimized for the USAF mission.

Boeing continues to maintain that its new T-X will be more affordable and more flexible than derivatives of older, existing aircraft. Acquisition costs and through-life costs will need to be cheaper than the existing and mature T-50A and T-100. If the Boeing aircraft is more expensive overall, the question will turn to the benefits that would justify those extra costs.