Boeing T-X update: not one, but two jets

In the course of today’s (September 13) unveiling of the first prototype T-X offering from Boeing and its project partner Saab, the companies revealed that two aircraft have now been completed. The team is now setting its sights on the US Air Force’s competition for a new advanced trainer, which is set to result in orders for 350 new jet trainers.

According to a press release from Saab: ‘Boeing and its partner Saab AB will use their two production T-X aircraft, revealed today, to show the US Air Force the performance, affordability, and maintainability advantages of their approach.’

Like the Northrop Grumman T-X design, unofficial photos of which emerged last month, the Boeing T-X is an all-new ‘clean-sheet’ aircraft designed specifically for the USAF requirement to replace the Northrop T-38 Talon.

‘Our T-X is real, ready and the right choice for training pilots for generations to come’, said Boeing Defense, Space and President and CEO Leanne Caret, at the unveiling. 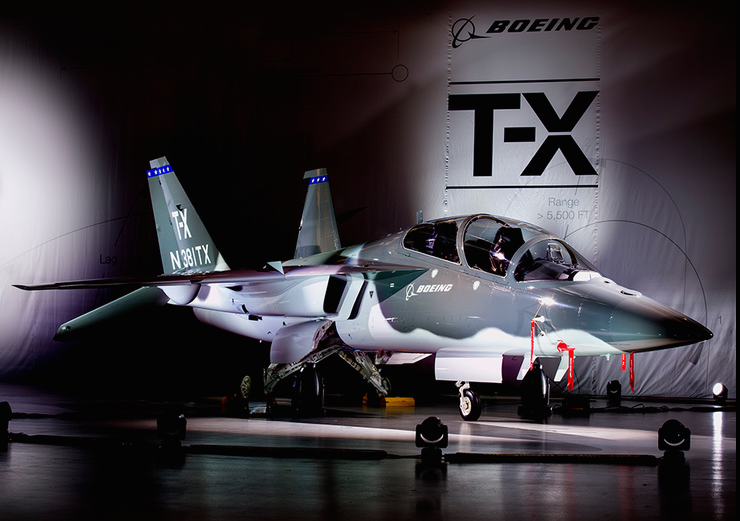 So far, we know the Boeing T-X aircraft has a single afterburning General Electric F404 engine, twin tails, ‘stadium’ seating and an advanced cockpit with embedded training. In common with the other T-X contenders, the Boeing system also offers state-of-the-art ground-based training.  ‘It’s an honor to build the future of Air Force training’, said Saab President and CEO Håkan Buskhe. ‘We have created the best solution thanks to great cooperation and a clear strategy since day one.’

Surprisingly, no mention has been made of an in-house designation or project name for the Boeing T-X entry, and when asked on the subject, a Boeing official told reporters that the design currently has ‘no official name’.