What does the Boeing T-X ‘clean sheet’ aircraft need to offer? #CATX

Next Tuesday September 13, Boeing and partner Saab will roll out their brand new T-X trainer design for the world to see.

Reporters are invited to Boeing’s St Louis, Missouri, plant for the unveiling ceremony, which will finally end years of speculation regarding what exactly Boeing and Saab will offer with their joint ‘clean sheet’ aircraft design.

The story of this aircraft dates back to around 2010, when Boeing first announced it would offer a brand new aircraft to meet the USAF T-X requirement to replace the T-38 Talon in the advanced jet training role. In 2013 it partnered with Sweden’s Saab, which has pioneered what it calls smart production techniques. Saab’s new Gripen E fighter, which was rolled-out in May, has been developed with strict considerations set by the principle customer — the Swedish Air Force. The Swedish Air Force has been vocal in its opinion that it cannot accept a fighter that it can’t afford to operate — and the Gripen E is all about redefining how to build and operate an advanced fighter that offers operational capabilities relevant for the future, new technology, and a sensible price tag. 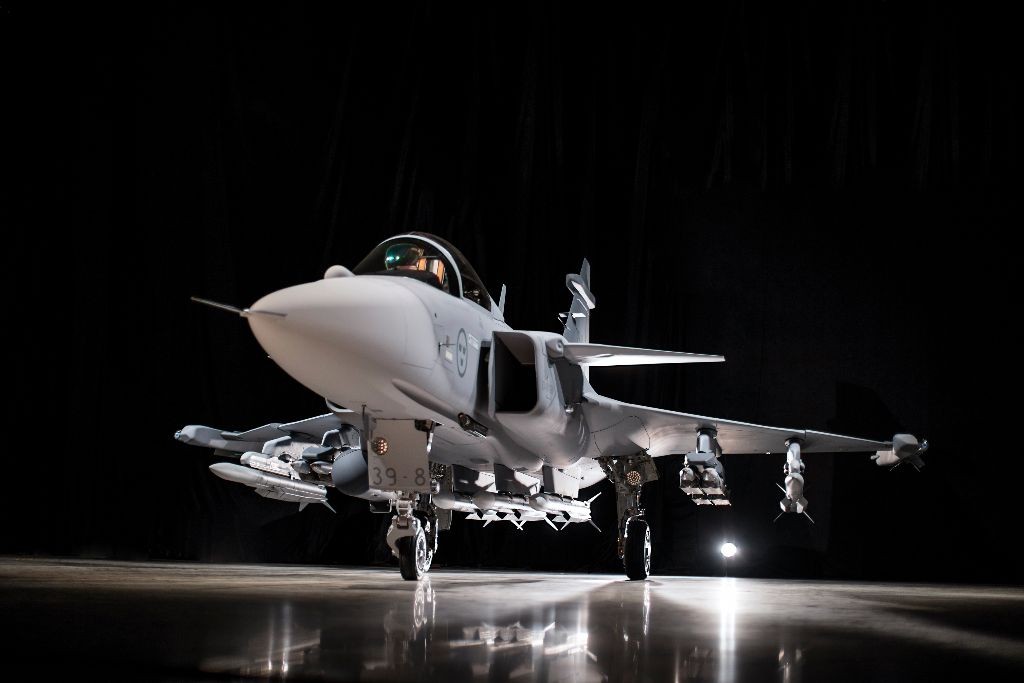 ‘We have reduced development and production costs by 40 per cent’, says Saab’s Lars Ydreskog of the Gripen E in comparison with its Gripen C predecessor. The three-year full-scale development of the new variant moved away from paper-based design drawings and wholly embraced what Saab calls Model-Based Systems Engineering (MBSE). ‘It just wasn’t possible to do it the old way’, says Ydreskog. Saab has been able to model, evaluate and build the Gripen E via this method. It has been a key factor in reducing costs surrounding the program. Of course, the company is able to tap into the wealth of data it has from the flight-testing of previous Gripen variants, but the new approach has also helped to reduce the planned flight test campaign, which is expected to comprise just one-third of what was required for the C/D version.

One of the major questions surrounding off-the-shelf T-X offerings such as the Lockheed Martin T-50 versus the Boeing/Saab design is whether the new aircraft can compete in terms of cost? The new aircraft have to start a flight test and certification process from a standing start, versus the mature offerings. Saab’s experience with Gripen E may allow Boeing to address this concern and help to present a swift path to certification.

Production and through life costs will need to be similarly competitive, so available data on the T-50 and M-346 (T-100) in service will need to have been crunched by Boeing and Saab to ensure that their numbers come out favorably.

The ‘clean sheet’ aircraft — including the new Northrop Grumman design — need to show significant, dependable, advantages to mitigate their risk against the proven and mature off-the-shelf offerings. It begs the question ‘how much better can they be?’

The answer can only be that the ‘clean sheet’ aircraft need to be near perfect in terms of performance, fitting the USAF’s goals like a glove.  There needs to be a clear understanding of production and through life costs. They need to have a clear synthetic training plan with a trusted supplier for this important part of modern training — probably re-writing the rulebook when it comes to live/virtual training. Plus they need to have a clear and concise development and certification flight test plan.

There are other factors at play here though.

Boeing’s military aircraft production plant in St. Louis staring in the face of a black hole at the end of this decade as Super Hornet, Growler and Eagle production is set to end. There can be little doubt that the desire to maintain St. Louis through the award of a deal such as T-X will be a major consideration for the US military aerospace manufacturing base.

One thing’s for sure. All eyes will be on the rollout next week…