Despite being one of the hottest competitions in military aerospace right now, there is surprisingly little being said about the US Air Force’s T-38 Talon replacement program T-X. The Boeing/Saab team is saying nothing at the Farnborough International Air Show (FIAS) about its clean sheet design. Northrop Grumman is once again absent from the show (so nobody to discuss their clean sheet design), Lockheed Martin is here in strength with its F-35 presence — but it too is tight lipped about the T-50 it is offering to the USAF.

Only Raytheon has broken the T-X silence, talking today about the T-100, which it calls a ‘Block Upgrade’ for the baseline Leonardo M-346 Master.

Speaking this morning, Raytheon’s Dan Darnell, a retired USAF three-star General (former F-15C pilot, Weapons School graduate and former team leader of the Thunderbirds!) said that the T-100 presents a ‘mature’ solution for the USAF’s T-X requirement for 350 aircraft. The T-346 is currently in service with the Italian Air Force and it is indeed providing a stellar capability that is currently (arguably) unmatched on the world stage.

As we reported in this magazine: Alenia Aermacchi (now Leonardo) jointly developed the M-346 in co-operation with the Russian aircraft manufacturer Yakovlev. The Russian company started development of the Yak-130 in 1991, but the company needed more advanced knowledge at that time and found a partner with Alenia. From 1993, both companies worked closely together and this resulted in the first flight of the Yak-130/AEM-130 in 1996. Unsolvable disputes between the two companies resulted in the end of the joint venture in 2000.

Alenia evolved the M-346 that led to a substantially modified and highly advanced jet trainer that retained almost the same appearance as the Yak-130. The M-346 is equipped with a full-digital cockpit, multifunction displays (MFD), hands on throttle and stick (HOTAS) controls, a head-up display (HUD) for student and instructor, voice control inputs, carefree handling and helmet-mounted display. These capabilities are normally reserved for advanced multi-role fighter aircraft, not for trainers.

The M-346 is able to simulate the flight characteristics of, for example, the F-16 and F-35 at supersonic speeds, or the ‘switchology’ of an F/A-18 or Typhoon. Pilots can learn to make use of radar in combination with almost every type of Western air-to-air missile, or they can operate a targeting pod to work with a diversity of (laser-) guided weapons that they can ‘drop’ on static or moving ground targets. At the same time a variety of other sensors can be used. And all this, with a subsonic, unarmed M-346 that is not equipped with a radar, sensors or pods.

When it comes to the T-346A, Leonardo provided the Italian Air Force with a ‘gold-plated’ Integrated Training System (ITS). This groundbreaking system includes not only the aircraft themselves but also the Ground Based Training System (GBTS) and an Integrated Logistic Support (ILS). The purpose-built training facility for the GBTS includes various classrooms with specific simulation systems and teaching aids that readily allow the student to become familiar with the aircraft, its procedures, on-board systems and tactics that can all be harnessed ahead of the expensive and demanding live flying.

It all starts with Computer Based Training full of e-learning supplemented by lectures. The Simulator Based Training (SBT) includes nine Procedural Training Devices (PTD), before moving on to the impressive Full Mission Simulator (FMS) in a 360° dome that enables realistic mission rehearsal with night vision goggle and, soon, helmet-mounted display (HMD) functionality. Tactical missions in the simulator can be linked to other simulators or indeed to aircraft actually in flight. This is part of the so-called Live Virtual Constructive (LVC) training which enables interoperability between various elements, networking the aircraft (Live), simulators (Virtual) and Computer Generated Forces (Constructive) via the aircraft’s Embedded Tactical Training System (ETTS), within a Distributed Mission Operations (DMO) environment in which the real flights can be combined, to simulate the presence of other forces both allied and opponents.

For the USAF requirement, Raytheon and Leonardo are replacing the current cockpit layout with a new large area display (LAD) — similar to that in the F-35. According to USAF requirements, both cockpits are to have identical displays and controls, and the aircraft is to feature terrain and collision avoidance equipment. The T-X winner will also feature the switchology for simulated weapons release of both air-to-air and air-to-ground weapons, and be able to carry a weapon systems support pod and a travel pod.

The large area displays will be compatible with NVGs and have been adopted to ‘meet the advanced training mission of teaching avionics integration and sensor management’. 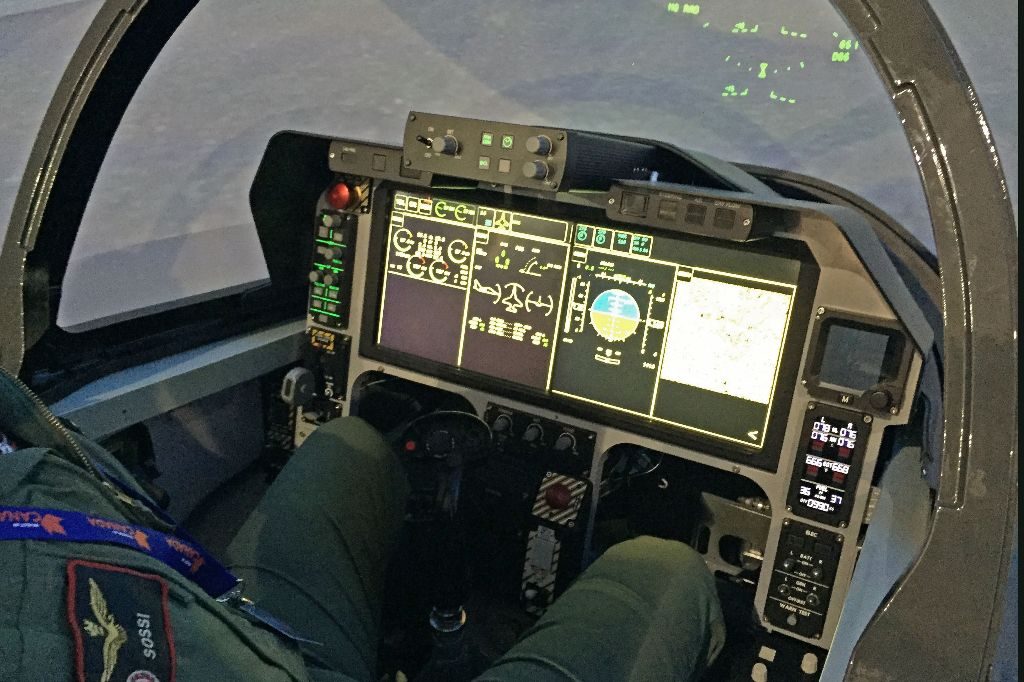 This video shows a demonstration of both the Pilot Task Trainer — that allows students to become proficient in cockpit procedures, plus the ETTS with the new large area display.

Dual roles?
The T-X replacement for the T-38 will continue to be used in the advanced flying training role. However, the embedded training recognises a need to continue to embrace the development of new technology, enabling pilots to learn the important sensor management skills but downloaded onto a less expensive platform. Dan Darnell recognised that the T-38 syllabus within Air Education and Training Command has hardly changed since he went through pilot training!

Darnell also said that the USAF had asked contractors to ‘make accommodation’ for an expanded remit for the T-X platform. This alludes to possible future use as an aggressor platform, or maybe even putting it into contention for the A-10 replacement ‘A-X’ arena. Darnell referred to the possible requirement as ‘AT-X’ — aknowledging possible future expansion into light strike roles for the competition winner. Indeed, this week, Leonardo briefed on the M-346T that can switch between a trainer and combat role, which is now in testing. The M-346T is currently certified for use of real weapons as well as its use of embedded simulation, including a 12.7mm gun pod, AIM-9L and IRIS-T air-to-air missiles. Air-to-ground weapons certification will follow soon.

In February, a pair of Italian Air Force T-346As was detached from 61° Stormo at Lecce-Galatina to Los Llanos air base, Albacete, to act as Red Air aggressors for NATO’s Tactical Leadership Programme (TLP) training exercise under way at the Spanish base. Col Paolo Tarantino, commander of the wing, told Combat Aircraft: ‘A series of very interesting situations have come together to bring about our involvement in TLP. Firstly, the Italian Air Force was the first nation to become involved in TLP back when it started, but also there is a shortage of aircraft to fly in the Red Air role right now. So as we made our 2016 scheduling plans we worked with the Italian Air Force Central Command to see if there was potential for us to participate in all the 2016 TLP courses as an aggressor.’

T-100 Block Upgrades
Raytheon says it doesn’t expect the T-X competition to result in a fly off. However, it expects a downselect of the contenders in late 2017 following the publication of the formal RFP by the end of this year. It says that ‘70% of the entire solution’ will be built in the US, including final assembly of the aircraft.

A Leonardo test aircraft is thought to have been earmarked as a technology demonstrator for T-100 and it will receive the new cockpit displays and a ‘plumbed’ aerial refuelling point to meet the boom refuelling requirement for the USAF.

Three significant performance characteristics stood out among over 100 points in the March 2015 requirements list for the T-X: a sustained turn rate of a minimum of 6.5g, simulator visual acuity and performance, plus aircraft sustainment. That minimum sustained G requirement of 6.5g and an objective of 7.5g immediately threw questionmarks over the M-346’s ability to meet these targets.

General Dynamics was initially the US prime for the T-100, however, in early April 2015 it dramatically pulled out of T-X. General Dynamics’ decision to ditch its T-X effort as a prime contractor was announced on March 26, just a week after the Air Force released these final program requirements. A General Dynamics statement said: ‘When the program was as an off-the-shelf airplane, we believed that our program management skills provided value-add to the customer. However, as the program moved from an off-the-shelf-only airplane to a more engineered trainer, we no longer believed that value proposition existed.’

Dan Darnell said ‘there’s a lot of urban myth and legend that the aircraft (T-100) can’t meet key performance parameters’, referring to maneuvrability of the aircraft and instantaneous turn rate. He added that the T-100 ‘easily meets and exceeds (USAF) requirements.’

There is no doubt that the M-346 and its T-100 Block Upgrade for the T-X competition represents a highly credible solution for the Raytheon/Leonardo team. The big question hangs over how well the Northrop Grumman/BAE Systems and Boeing/Saab camps are able to tailor their clean sheet aircraft and associated live/virtual training aids to meet the exacting USAF requirements. Or whether a proven, mature, solution will be preferred.