An A-10C bearing down, ready to unleash its 30mm Gatling is bad news for any enemy force on the battlefield. Luckily this time it’s training and it’s the Nellis Ranges.

In the forthcoming July issue of Combat Aircraft we have an exclusive feature on the USAF Weapon’s Schools’ 66th Weapons Squadron. The 66th comprises both A-10 pilots and Joint Terminal Attack Controllers, working together to generate the very best close air support specialists — bar none!

‘Close air support by its very nature is not an Air Force fight, it’s not even a US fight — it’s a fight that everyone needs to be able to complete together’, explains Lt Col Scott ‘Manual’ Mills, commander of the 66th WPS. Whenever talking about the CAS mission, the argument inevitably turns to the question of plans to retire the A-10. It’s an emotive subject for many, but at the 66th WPS one quickly realizes that the wider media doesn’t always pick up on the open-minded approach of the actual CAS professionals who deal with this mission day in, day out.

Lt Col Mills is very clear. ‘I love the A-10. When they built this airplane they created a culture. You’re never going to find an A-10 pilot who stands up and says that the A-10 is the only aircraft that [can do CAS], because A-10 pilots aren’t airplane advocates, but we are CAS advocates. ‘A-10 pilots think about CAS as: I’m here to kill targets, protect friendlies, and survive to do it again tomorrow.’

Read more on this fascinating subject in the forthcoming July issue of Combat Aircraft. 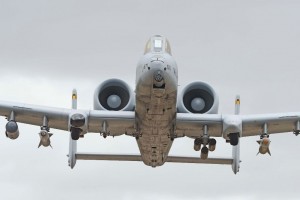 Posted in Features Tagged with: A-10